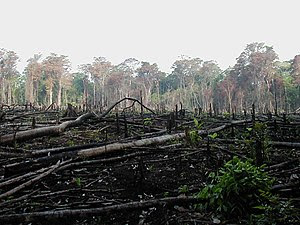 I was asked the other day why I think the UN's Reducing Emissions from Deforestation in Developing Countries (REDD) is a flawed, if not bad idea.

Here are 10 concerns I have about the REDD scheme:

1.) I've said it before, but will say it again: Entrusting governments to protect their forests in light of competing interests of growth, feeding hungry, and poverty reduction is very risky.

2.) We can't ensure that forest protection won't lead to shutting out the interests of local people and lining the pockets of corrupt government officials, corporations, or even NGOs. Better to trust the local community to manage their forest assets -- or at the very least, make sure they have a seat at the table.

3.) Underdeveloped monitoring and accounting could lead to unscrupulous speculation and gaming the system. How can we protect against the Bernie Madoff of the carbon market or the Enron of global forest protection? (And don't forget organized crime: Interpol, the world's leading policing agency, raised concerns in early October that chances were very high criminal gangs could take advantage of REDD schemes, according to an article in the Guardian.)

4.) We need to raise standards of living by valuing and maintaining natural capital not converting it and not, necessarily, setting it aside. And we need to ensure that the local communities have more influence and power over how their resources are managed for the multiple uses they require for access to pathways out of poverty.

5.) Right now REDD is only about reducing emissions: the money goes to those nations with high rates of deforestation. This could lead to perverse incentives or unintended consequences. If a nation has a low deforestation rate, they can't participate. What's to stop them from thinking, "Hey, if I accelerate my deforestation rate, I'll get paid to stop..."

6.) We need market mechanisms to drive protection. People won't protect it if there is no money in it, especially when cutting it down pays. We need to put a dollar value on the services forests provide: watershed protection, stabilizing soils, flood protection, as well as generating rainfall, storing carbon, and moderating the climate. What is that worth? Nicholas Stern suggested a $15B market value – that's a pittance compared to global insurance business of $3T -- a relatively cheap insurance policy.

7.) Could creating forest bonds, insurance products or user-fee water funds be tied to the ecosystem services provided by forests, ensuring that such things as agricultural productivity or water supplies linked to rainfall coming out of forests? (Some conservation groups have tried this, such as The Nature Conservancy's Water Funds in Ecuador.)

8.) We need an investment grading system for countries that participate in schemes like REDD: Those with good governance, clear land title law, and high forest protection receive AAA rating; those with high levels of corruption, conflict, and high deforestation are relegated to subprime. (This has been suggested by others, but I don't think it has been implemented.)

9.) I've said this before, too: Philanthropy and government taxes are not going to be able to protect the world's forest assets – you need viable market mechanisms and the will to unleash the entrepreneurial spirit of the people who depend upon the forests.

10.) The solutions must be market-based: If someone is getting paid $5 to cut down a tree, you're going to have to pay him $6 to leave it there; if you can pay him $10 to not cut and make some money off a related product or service, even better. We need to figure out how to make that happen and ensure there are proper financial incentives for the 1.6B people who depend upon forests for water, food, and livelihoods.

To date, rich countries have put up $52M to establish nine UN-sanctioned REDD pilot schemes in Asia, Latin America, and Africa -- and private schemes are forming through a consortia of banks, conservation groups, and other businesses.

I just don't think handing out what essentially amounts to aid to developing countries is the right solution. I do hope the Copenhagen delegates consider the unintended consequences of their bold actions. (Remember the food vs. fuel issue created by jumping on the ethanol bandwagon!)

REDD ain't the new black, at least not to this green skeptic.

Posted by greenskeptic at 8:25 PM