Mark Zandi to MAC Conference: "The Great Recession is Over" 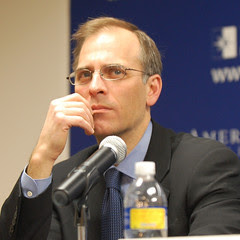 "The Great Recession is over," Mark Zandi, founder and chief economist of Moody's Economy.com, told a crowd of investors, entrepreneurs, and others gathered at the 2009 Mid-Atlantic Capital Alliance Conference in its opening keynote Tuesday.

"In fact, it ended on August 23rd," Zandi quipped. "If you want to know the precise time, you have to buy my book."

Zandi was referring to Financial Shock, his new book about the subprime crisis.

"It was no accident that the recession ended just as the stimulus kicked in," Zandi related. "The maximum impact was felt just when the maximum contribution was made: 3Q of this year."

And that's not a bad thing, Zandi said. In fact, this former economic advisor to GOP presidential candidate John McCain said he hopes that policymakers will be more aggressive in trying to rise the tide.

"The policy response was aggressive, but it needed to be," said Zandi. "Now they need to do more."

He cautioned that "recovery will be a bit of a slaw." (I first thought he said "slog," but then he repeated "slaw," by which I think he meant a salad of mixed bag.)

The foreclosure crisis will continue and we'll start to see it hit the commercial real estate market soon, according to Zandi, perhaps by the second quarter of next year.

Zandi wasn't all doom-and-gloom and tried to reassure the crowd gathered in the grand ballroom at the Pennsylvania Convention Center in Philadelphia.

This year's conference location was significant, in Zandi's opinion, because the region weathered the recession better than other parts of the country.

In part, this is due to the fact that it didn't have very far to fall, and partly due to relatively stable real estate prices -- especially outside of New York City and Washington, DC -- but also because the region boasts healthy components that are critical to getting out of the recession and building beyond it: health care and education.

"50 year olds are the single largest age group in the US," Zandi remarked. "And they will be sucking up a lot of health care."

The second largest age group? The 20-year-old firstborns of that top group, most of whom are setting out on their secondary and tertiary educational paths. Both education and health care will be engines of growth in the future -- and the future is here.

The MAC Conference is the annual venture capital gathering for the Mid-Atlantic region, which comprises the area between New England and the South, and can include states such as Delaware, Maryland, New Jersey, New York, Pennsylvania, Washington D.C., and sometimes Virginia and West Virginia.

The Conference runs through 4 November, with company presentations and other speakers and panels. (I'll be covering the clean tech track and reporting on it here later.)

Posted by greenskeptic at 6:00 AM