Where's the Beef: Will Banning Amazon Beef Doom the Rainfrorest? 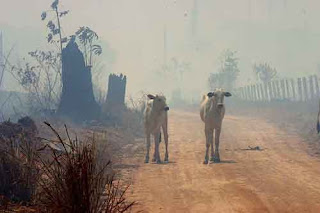 Cleary, the director of conservation strategies in South America for The Nature Conservancy, lived in the Amazon for over a decade and he knows that "the most important driver of deforestation in the Amazon is ranching, with pasture having replaced more than 80 percent of the Brazilian Amazon cleared since reliable satellite records began, in the early 1980s."

As Cleary writes in his Cool Green Science blog post this week, "There are good reasons why ranching thrives in the Amazon: land is free or cheap in most of it, cattle need minimal care, and they can walk to market."

But efforts to green the beef supply chain always fell short, Cleary says, until last month when "Friends of the Earth in Brazil and Greenpeace in Europe came out with separate reports detailing the role of the beef industry in driving Amazon deforestation. There was a media firestorm. Within days, all the major Brazilian supermarket chains (Carrefour and Walmart among them) announced new policies banning the purchase of meat linked to deforestation in the Amazon."

Cleary contends that while this is a milestone, it could quickly turn into a millstone if the market for Amazon beef shifts elsewhere.

"The problem with trying to inject conservation into commodity markets is that they’re global," writes Cleary. "The danger with the Greenpeace/Friends of the Earth approach is that it cuts off access to markets that could change the behavior of producers and influence them to stop deforesting."

The trick, Cleary argues is "getting beef markets to work in a way that brings deforestation down, instead of simply switching the markets and consumers that drive it."

Posted by greenskeptic at 9:32 AM