Review: Where the Wild Things Were by William Stolzenburg 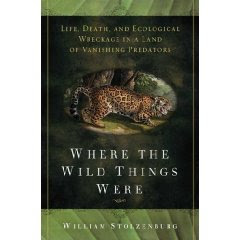 I remember the day when I was no longer at the top of the food chain.

I was flying into Lower Talarik Creek in southwestern with nothing but a fly rod, a note book, a sleeping bag, and hubris. As we circled the lagoon, the float plane pilot pointed out 10 or 12 brown bears that had already secured the fishing hole.

We landed anyway and the bears disappeared. The low brush was barely enough to hide them. They were gone, but they were out there.

Until you've experienced the fear, adrenaline rush, and deep respect you feel in close proximity with a large predator, you haven't really lived.

As a species we have a complex relationship with predators, whether large cats, bears, wolves, sharks, or killer whales. It's a mixture of deep-seated fear and loathing, along with time-honored respect and admiration. Some of it goes back so far in our DNA that it is no longer top-of-mind. Most of us don't have to worry about it, safely ensconced in our cities, towns, and bedroom communities.

But Will Stolzenburg worries about it plenty. So do the biologists, activists, ranchers and others he writes about in Where the Wild Things Were: Life, Death, and Ecological Wreckage in a Land of Vanishing Predators, being published this month by Bloomsbury.

Stolzenburg, a former colleague at the Nature Conservancy and a writer for Science News, Conservation, and Nature Conservancy magazine, admits he is biased in favor of big predators. But he also understands the complexity of the psychology around their interaction with Homo sapiens.

"Over the thousands of millennia that our own lineage has spent in the company of killing beasts," Stolzenburg writes. "Competing with them for food and running from them as food -- the great meat-eaters have quite naturally etched themselves into the human persona."

Stolzenburg has written a compelling book, a short history of our relationship with predator species, which uses scientists and their stories to tell the story of that relationship and of the importance of predators on land and sea.

His story starts with an unlikely hero, the starfish (Pisaster ochraceous), which prevents mussels such as Myltilus californianus from crowding other species off rock habitats. Who amongst us would classify the sea star among the big charismatic megafauna? But they play an important role.

As do sea otters, which keep sea urchin populations down and minimizes their destruction of kelp forests. And then there are the usual suspects: wolves, coyotes and big cats that maintain a check on populations of smaller mammals and other species to avoid cascading, sometimes catastrophic changes.

Stolzenburg reviews the arguments surrounding the importance of predators to their habitats as well as the various attempts to extirpate them and to bring them back from the brink.

"The great predators are great barometers of our maturity as a species," he concludes. "If we can live with an animal that could just as soon eat us as an apple, if we can make room for an animal that traverses entire states looking for a mate, how better to define the art of compassion"

He follows the major thought leaders in conservation biology of the past 40 years on their journeys of discovery, enlightenment, and sometimes ridicule. The stories are fascinating and Stolzenburg makes the tales come to life in an almost Scott Turow novel way. (If you think scientist-researchers and field biologists lead boring lives in the academe, Stolzenburg will convince you otherwise.)

Equally fascinating are some of the depictions and explorations of the predators themselves, especially the chapters on killer whales and on "the loneliest predator," man. Fascinating, too, how recent some of the thinking is about species interaction and interdependency, until you realize that conservation biology as a field is relatively young.

Will Stolzenburg knows how to tell a story and his narrative is a good read. Part history, part mystery, part philosophical treatise, Where the Wild Things Were is an important book in the field of conservation, but also as a history of our species and our relationship with the others with which we share the planet.
Posted by The Green Skeptic at 11:30 PM