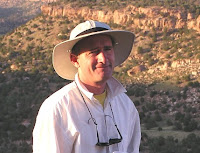 Mark Burget, Chief Conservation Programs Officer of the Nature Conservancy announced his departure last Friday. It came as a surprise to me, as it may have to others, because, frankly, Mark is one of those people who personifies the Conservancy.

The core values of TNC are integrity beyond reproach, respect for people, community, and culture, and commitment to tangible, lasting results; all of these can be used to describe Mark. Oh, and one other: "One Conservancy," which was John Sawhill's way of saying a collaborative spirit that works for the whole of the organization, not just its parts.

In fact, Mark always kept the whole of conservation in mind when he set strategy, whether as program director for the Upper Colorado River Basin, state director in Colorado and California, or in his more global responsibilities over the past few years.

And I gather it is this consideration of the whole that is once again in his mind as he decided to leave TNC. He is heading to ClimateWorks, a San Francisco-based non-profit that is focused, as Mark put it in his letter to colleagues, "on the most pressing environmental issue of our time: the need to dramatically reduce the greenhouse gas emissions that threaten to disrupt and destroy the miracle of life and the human experience on Earth."

TNC will miss Mark's leadership, vision, and sheer brilliance -- he is one of the most thoughtful and strategic thinkers in the field of conservation. But Mark would not have made this decision without a whole lotta soul-searching. I applaud Mark's decision and will look forward to his success at ClimateWorks.

Mark Burget joined the Conservancy in 1992 as the Program Director for the Upper Colorado River Basin. He earned both his J.D. and M.B.A. from the University of Virginia and his BA in Government from Dartmouth College. Since joining the Conservancy, Mark has held several leadership positions including Director of the Colorado Program, Director of the Global Priorities Group, and most recently Director of the California Program. Mark assumed his current position as Chief Conservation Program Officer in 2007 and leads the Conservancy’s eight conservation regions worldwide.

Posted by The Green Skeptic at 8:12 AM