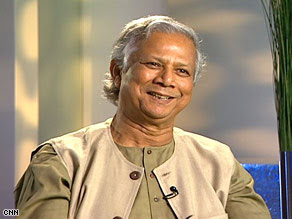 CNN's Talk Asia features an interview with Muhammad Yunus, who received the Nobel Peace Prize in 2006 for his pioneering work in microcredit. Readers of The Green Skeptic will be familiar with Yunus and the Grameen Bank he founded, which brought financial services to the poor, and which as of September, 2007, has 7.31 million borrowers, 97 percent of whom are women.

"Women have a long-term vision, she wants to move up to something."

"It's not Grameen Bank came and told them to do that; it is in their hearts."

"We developed a system which doesn't need collateral, guarantee, legal."

"We citizens, we individuals, are capable people addressing social issues."

Read the full interview here: Talk Asia
Posted by The Green Skeptic at 4:49 AM

Thanks for posting this.

I think Microcredit is part of an amazing new wave of helping impoverished countries. Not through handouts and government programs but through real opportunities for individuals to change their own lives.