Review: Before the Lights Go Out: Conquering the Energy Crisis Before It Conquers Us by Maggie Koerth-Baker 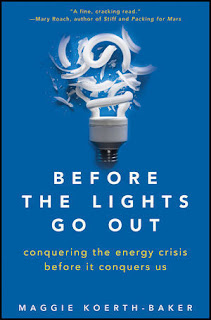 In her book Before the Lights Go Out: Conquering the Energy Crisis Before It Conquers Us

, which I am woefully behind reviewing, Koerth-Baker, the science editor at the blog, Boing-Boing, serves up equal doses of pragmatism and practicality in a Midwestern voice that is as mellifluous as wind cascading over the plains -- or the blades of a wind turbine.

Although she opens her book with the sentence, "'Climate Change is a lie,'" Koerth-Baker is neither climate denier nor climate hawk, although I suspect she is closer to the latter.

But that opening salvo is part of telling the story of the Climate and Energy Project, an environmental activist group in her home state of Kansas, and its founder realization that "you don't have to care about climate change to care about energy."

And, Koerth-Baker argues, we better do something about energy.

"We're currently on a course to use 28 percent more energy a year in 2030 than we do now," Koerth-Baker writes. "If that comes to pass, we'll need more of everything: more coal, more nuclear, more oil, more gas, more wind, more solar, and a whole lot more money to pay for it all."

This is a practical, solution-oriented book. Koerth-Baker is a whizz at making complex concepts such as our national grid, Feed-in-Tariffs, and underwater hydroelectric generation simple -- and she's a good story teller too.

She also recognizes that, "no single energy solution is as good a solution as it sounds." Energy efficiency is great, but it can't solve all our problems. It's too easy to end up with too much or too little wind and solar, and other forms of generation have side effects and negative impacts, such as pollution.

The solution rests in changing the way we think about energy.

As Dr. William Moomaw of Tufts University's Fletcher School of Law and Diplomacy tells Koerth-Baker, "What we have to do is help people see that they don't really care about the energy and emissions. What they want is the services--light, base comforts, mobility, electronics."

Making the green option the default may also help, creating buildings and systems that make it easy to reduce energy consumption.

"Instead of worrying about how to change people," Koerth-Baker asserts, "you change the world around them." Such as the way the Navy has approached it in their Naval Air Station in Jacksonville, Florida, and other examples she cites.

In the end, Koerth-Baker, ever the pragmatist, is cautiously optimistic.

"This can work," she concludes her book. "This future can happen. Yet it won't simply happen on its own. Standing between us and the future of energy is an awfully big wall. Whether we can scale it will depend on how well we can plan and whether we have the willpower to follow those plans through."