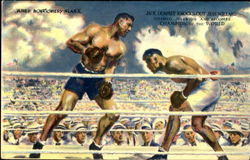 Somewhere in my house I have a postcard signed by Jack Dempsey.

The card is just like the one depicted here and the signature is virtually the same, although I think it says, "Hey, Scott --" over his name. My father got it for me while on a business trip to New York.

As a kid, I was a boxing nut. Of course it was hard not to be in those days -- the 70s -- with Joe Frazier, Muhammad Ali, George Foreman, the "Thrilla in Manila," the "Rumble in the Jungle," and all that "float like a butterfly and stinging like a bee" poetry.

I followed every fight, read every book I could, from Joe Louis's autobiography My Life

to A.J. Liebling's The Sweet Science

, and watched every boxing film from "Rocky" to "Raging Bull" and "Requiem for a Heavyweight" to "The Harder They Fall."

My brothers and I used to don socks stuffed with socks and have three-round fights on the "ring" of our parents' king-sized bed until we broke the box spring.

Boxing was king back then. But as the 70s came to a close and Frazier and Ali retired and then Ali's battle with Parkinson's shed light on the brutality of boxing, I lost interest.

By the time Mike Tyson bit off a piece of Evander Holyfield's ear, I was long over my obsession with boxing.

Watching Muhammad Ali deteriorate over the years proved a knock-out for me and the sport.  (Don't even get me started on cage fighting.)

The death of Smokin' Joe Frazier brought me back to those days when boxing was king this morning.

"Life doesn't run away from nobody," Joe Frazier once said. "Life runs at people."

Posted by greenskeptic at 9:40 AM