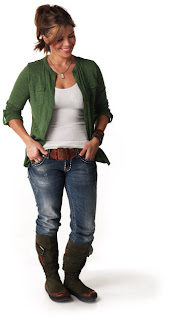 I was scanning channels last night when I happened upon one of those DIY shows where a woman demonstrated how to make handmade paper from shredded recycled paper and natural elements.

Craft shows are not usually the kind of thing that grabs my attention. But there I was, mesmerized by this woman's creative act and the fact that she was sharing it intentionally, re-purposing old things to make something new and beautiful.

Turns out the woman was Michele Beschen, the brainchild behind "b.organic," which bills itself as "an educational how-to television program that embraces all things creative while keeping a conscious mind," and founder of her own multimedia company, Simply Michele, Inc, with a "mission to empower people to explore, express and exchange fresh ideas through rousing content platforms built around originality and grassroots efforts."

I've been thinking a lot about creativity lately. Part of my talk at SXSW ECO was about how we need to reconnect with the creative parts of ourselves and get back to making things. Michele Beschen embodies that.

So did Steve Jobs. In his famous 2005 commencement speech, Jobs told the Stanford graduates that "much of what I stumbled into by following my curiosity and intuition turned out to be priceless later on."

Jobs talked about connecting the dots. In his case, one dot was stumbling into a calligraphy class at Reed College after he dropped out that later resulted in his creating multiple fonts for the Mac. He never could have known the influence that class would have.

"If I had never dropped in on that single course in college," Jobs noted. "The Mac would have never had multiple typefaces or proportionally spaced fonts."

Jobs knew that "you can’t connect the dots looking forward; you can only connect them looking backwards. So you have to trust that the dots will somehow connect in your future. You have to trust in something -- your gut, destiny, life, karma, whatever. This approach has never let me down, and it has made all the difference in my life."

Great work is about being creative, making things, and generating value.

"And the only way to do great work is to love what you do," Jobs told the Stanford grads. "If you haven’t found it yet, keep looking. Don’t settle."

Then I saw poet Christian Bok's tweet: "They cut apart ledger papers into artwork-(very envious of this level of intensity...)." He linked to artist Jill Sylvia's web site. She does indeed cut ledger papers into things of quiet beauty. People do amazing things when they let their creativity loose on the world.

In Hugh McLeod's book, Evil Plans: Having Fun on the Road to World Domination

(which I reviewed here) he has a chapter titled,


"The 'Creative Life' Is No Longer One of Many Economic Options; It's Now the Only Option We've Got."

That's it. The whole chapter. There is nothing more to say.

What are you creating?

Posted by greenskeptic at 11:57 AM