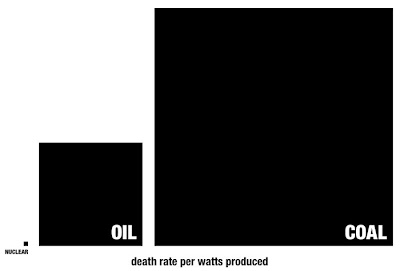 No, the infographic above is not an April Fool's joke.  It comes from Seth Godin and compares deaths per terawatt hour of energy produced by nuclear, oil, and coal. The data comes from the World Health Organization.

We found several interesting pieces on nuclear energy over the past week:

While George Monbiot shares How the Fukushima disaster taught him to stop worrying and embrace nuclear power: Going Critical.

Timothy Reuter of IdeasOnEnergy reports on Secretary of the US Navy Ray Mabus's Council on Foreign Relations talk about the Navy’s efforts to transform how they use energy and their intention to become a catalyst for changes in overall energy consumption: Can the U.S. Navy reform how America produces and consumes energy?

The BBC reported on a new Royal Society study that indicates China will overtake the US in science by 2013: China Syndrome.

A new Nature Conservancy study postulates that a Billion-plus people to lack water in 2050.

Josie Garthwaite of Earth2Tech offers several reasons Why A Company Would Ditch A DOE Loan Guarantee.

Posted by greenskeptic at 8:17 AM