Van Jones From Pillar to Pariah in Six Months 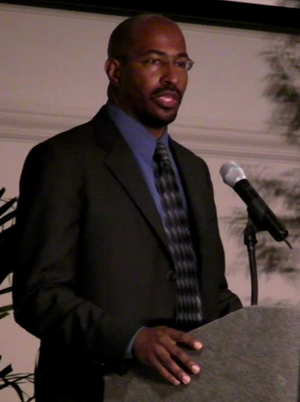 Six months ago the appointment of Van Jones was widely anticipated and hailed as a win for the new green economy.

On the subject of green jobs, Jones had hopes of being a uniter not a divider, but remarks from throughout his career -- some as recent as a month before his appointment in the Obama administration -- along with some mistakes and questionable affiliations and associations, have brought about his downfall.

Early this morning, Van Jones resigned his position as the so-called "green jobs czar" in the Obama Administration.

Readers of the green skeptic know that I have been a fan of Van Jones' work on the new green economy. His "eco-capitalist" approach is in keeping with how I feel we need to rebuild our economy: focus on alternative energy and clean tech development and create jobs for as many Americans as possible.

I am no apologist for Van Jones. His widely circulated remarks strike me as foolish and hurtful and divisive -- not in keeping with someone who has often said he wants to bring people together to promote clean energy and jobs that bring people out of poverty. And they in no way represent the Jones I know.

But make no mistake: he said what he said. And taken at face value, his statements are pretty damning and, well, just plain dumb.

In February, Jones called Republicans who prevented environmental legislation "a-holes" and, in June 2008, characterized then President Bush as "sounding like a crackhead" addicted to oil. These are the kind of divisive statements made to appeal to the left-leaning audiences to which they were delivered. (Note the cheering crowds in both videos.)

Were Jones a comedian, he might be able to get away with this stuff -- his delivery of the crackhead line and his adlibbing after are actually pretty good stand-up -- we might not think anything of it.

But coming from someone who told the East Bay Express in 2005 that he was "interested in managing conflict with an eye toward maximizing unity," it seems disingenuous at best.

"There's a tradition of very nasty polemics on the left. I've seen it split coalitions, movements, parties," he told the Express reporter. "This is my concern: it's easy to start a fight, it's hard to finish a fight."

So what exactly did Jones have in mind with the comments in the above videos: entertainment value or divisive politics-as-usual? (The irony is that Jones in these two videos comes across as a kind of lefty equivalent of Glenn Beck, the guy who brought him down, fanning the rhetorical flames with sweeping generalizations and personal attacks.)

And whatever he says about it now, the fact is Jones signed the 911 Truth Statement, along with a bunch of other flaming liberals, boomer lefties, and even Catherine Austin Fitts, a member of the first Bush administration. Did he know what he was signing? If he didn't read it, why sign it?

His comments on Columbine have been widely shown, but here Jones seems to have been taken out of context.

"You’ve never seen a Columbine done by a black child. Never," he says. "They always say, 'We can't believe it happened here. We can't believe it's these suburban white kids.' It's only them. Now, a black kid might shoot another black kid. He's not going to shoot up the whole school."

If you watch the entire video, however, his remarks are not racist.

He could have and should have made his point about the alienation and neglect that young people of all colors and backgrounds feel without bringing up such unfortunate comparisons, but he didn't.

Similarly, his comments in the East Bay Express, about his being communist are easily misconstrued.

In the wake of the Rodney King assault trial verdicts, the 25-year-old Jones, who got swept up in mass arrests at demonstrations in San Francisco, fell in with a group of radicals he met in jail who shared his notions of "trying to be a revolutionary."

"I was a rowdy nationalist on April 28th, and then the verdicts came down on April 29th," he said. "By August, I was a communist."

As someone whose opinion I respect said to me last night, it's "hard to dispute someone's own words."

But did he mean he was really a Communist? Did he join the Communist Party?

According to the Express, Jones joined "a socialist collective, Standing Together to Organize a Revolutionary Movement, or STORM, which held study groups on the theories of Marx and Lenin and dreamed of a multiracial socialist utopia."

But a decade later, Jones was renouncing the old radicalism of his youth and trying to "present a positive vision Americans can latch onto and vote for," as the Express reporter put it.

"The country is waiting for a movement that inspires people, that doesn't just critique," Jones said. "That's my gut instinct. And when it's resonant, when it's right, people feel how they fit into it. We want a green economy that's strong enough to lift people out of poverty."

In other words, he grew up. This is actually a pretty typical western liberal path: early radicalism, even socialist idealism followed by an awakening of more moderate, free-market leanings and -- sometimes -- followed by an ascent (or fall, depending upon your political persuasion) into neo-conservatism.

The "grown up" Van Jones is the one those of us who believe in the potential of the new green economy embraced and supported. It's too bad the Van Jones that most will remember is the one who is flip and divisive and extreme.

Van made his own bed and must wake up in it. Hopefully, he will learn from his mistakes and renew his commitment to contribute to the vision that inspires and doesn't just critique.

Posted by greenskeptic at 10:57 AM