Review: Early Spring: An Ecologist and Her Children Wake to a Warming World by Amy Seidl 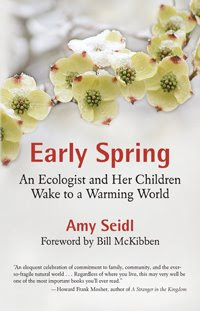 It was late spring by the time I started reading Amy Seidl's book, Early Spring: An Ecologist and Her Children Wake to a Warming World, but it was hard to tell.

April showers had given way to, well, May showers; and some of the warmest days of the year had produce intense clouds of pollen that were producing equally intense allergy symptoms in every one I met.

Dramatic and even extreme changes in weather patterns are one of the expected changes of a warming world. Seidl offers several others, including some terrifying possibilities involving insects, disease vectors, and pathogens. Oh my.

Seidl has written a book that is equal parts nature memoir, climate witness journal (a new genre!), and environmental impact study. Ultimately, it is a book that is both scientific and personal without being either dry or cloying. A none too difficult feat.

Seidl is an accomplished ecologist and field scientist, and her book is informed and made informative by fact and research.

But Seidl is also a mother and her observations are infused with a mother's concern and love for her children and their world.

The two aspects are complementary and together make for an engaging mix. Seidl explains the science of climate change as well as the potential impacts. She does so by bringing the impacts home in a way that makes it accessible to her readers.

Early in the book, in fact, she identifies this as a concern of hers:

"From my window I see no glaciers. I don't live near the ocean nor has my family's trip to coastal Maine been put on hold. The forecast of the scale of change that the earth will experience in the next century is unfathomable, and yet we are asked to believe it now because the risk of not believing is too grave."

From her window, in her farm, in her hollow in rural Vermont, Amy Seidl witnesses changes to her local climate and asks us to bear witness, too, in ours. Not to stand idly by and let it happen but

Amy Seidl has written a powerful and approachable book about our 21st Century dilemma and a call for "a new set of values" with which to deal with it.

Posted by greenskeptic at 2:45 PM