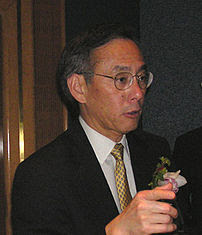 Image via WikipediaIf there was any question whether President-elect Barack Obama means to bring change to the way the White House handles the environment, he has answered.

Nobel laureate Steven Chu is apparently Obama's choice to head the Department of Energy as the prez-elect puts together his energy and environment team.

Chu, director of the Lawrence Berkeley National Laboratory, will be the nation's 12th energy secretary. He should be named next week, along with other key energy and environmental posts, according to reports.

Chu is an intriguing choice. He is not and energy insider, although he played a leading role in attracting a $500M investment from BP to establish a center for renewable fuels at Berkeley. And he is known for pushing the Lawrence Berkeley scientists to focus on climate change.

Some environmentalists are applauding the selection, as it signals that Obama wants to restore the credibility of White House science

Jackson is a former commissioner of the New Jersey Department of Environmental Protection and currently serves as chief of staff to New Jersey Governor Jon Corzine.

Nancy Sutley, deputy mayor for energy and the environment in the City of Los Angeles, will be Obama's pick for White House Council on Environmental Quality.

Obama is likely to tap liberal environmentalist Carol Browner for a new position to coordinate policy approaches to energy, the environment, and climate change. (Browner, an EPA administrator under former President Bill Clinton, has been an adviser on Obama’s transition team.)

What Obama's choices signal is a renewed emphasis on science, especially as it relates to energy policies, and a desire to make informed decisions about how to transform the US economy into a new green economy.

Posted by greenskeptic at 10:45 PM