Energy: Speculating on Oil Speculators, Wallstrip and others Weigh In

Is the high price of oil due to oil speculation? Opinions differ on the impact of investors looking to make a buck on limited supplies and rising demand.

Some point out that while the White House would like to blame supply shortages, that's the same argument given back when Enron was fleecing California by manipulating energy prices.

"Many members of the media have forgotten how in 2001 the White House deflected any blame for California's suddenly stratospheric electrical costs away from their Houston friends," wrote Ed Wallace in his Business Week Viewpoint piece on 27 June 2008.

"Likewise, our Energy Secretary has a real problem discussing issues with facts. Like a broken record, he continues to maintain that in no way has speculation had anything to do with today's high oil prices. No, to hear Sam Bodman tell it, they are now and always have been caused by too many buyers chasing too few barrels of oil."

But, as our friends at The Oil Drum (TOD) reported last week, a recent report by the Commodity Futures Trading Commission (CFTC), "threw cold water on the recent rhetoric in Congressional testimonies and television commentary that high oil prices are caused by investment speculators."

TOD quotes from the report, "The Task Force's preliminary assessment is that current oil prices and the increase in oil prices between January 2003 and June 2008 are largely due to fundamental supply and demand factors." And pulls this graphic to illustrate this view: 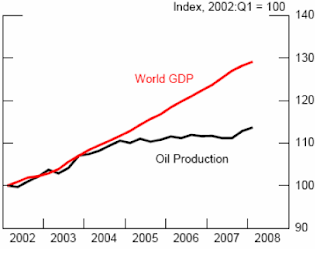 "During this same period," according to the report, "activity on the crude oil futures market – as measured by the number of contracts outstanding, trading activity, and the number of traders – has increased significantly. While these increases broadly coincided with the run-up in crude oil prices, the Task Force's preliminary analysis to date does not support the proposition that speculative activity has systematically driven changes in oil prices."

Now, our favorite Web tv daily, Wallstrip, takes a crack at explaining the links between the run up and commodities speculation:

Now, we'll believe anything Julie tells us (except that she'll call when she says she will), but the fact is, the run-up in oil prices is probably a bit of everything: less supply, higher demand, speculation, and good old-fashioned free-market profiteering (not that there's anything wrong with it...).

Posted by The Green Skeptic at 8:39 AM