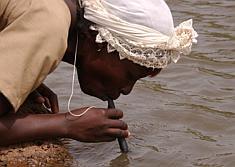 One of the UN Millennium Development Goals is to "reduce by half the proportion of people without sustainable access to safe drinking water" by the year 2015. Currently, more than one billion people do not have access to safe water and about half of the world's poor suffer from waterborne diseases. Over 6,000, mainly children, die each day by consuming unsafe drinking water.

Now a company called Vestergaard Frandsen, with branch offices in many developing countries, is pioneering a new product called the LifeStraw, which aims reduce the impact of waterborne diseases such as typhoid, cholera, dysentery, and diarrhea. The company specializes in disease control textiles and is the creator of the PermaNet, an insecticidal polyester mosquito bed net, and the ZeroFly shelter, an insecticidal plastic sheet that provides both shelter and malaria prevention for extreme emergency situations.

The LifeStraw turns surface water into drinking water as the drinker sucks in water from wherever she may be. Its simplicity is matched only by its effectiveness. It has a lifespan of 700 liters or about one year of water consumption for one person. The cost? The small plastic pipe filter runs around two bucks.

An article in MedGadget, "the internet journal of emerging medical technologies," describes the LifeStraw this way:

"What first meets the water when sucked up is a pre-filter of PE filter textile with a mesh opening of 100 micron, shortly followed by a second textile filter in polyester with a mesh opening of 15 micron. In this way all big articles are filtered out, even clusters of bacteria are removed. Then the water is led into a chamber of iodine impregnated beads, where bacteria, viruses and parasites are killed. The second chamber is a void space, where the iodine being washed off the beads can maintain their killing effect. The last chamber consists of granulated active carbon, which role is to take the main part of the bad smell of iodine, and to take the parasites that have not been taken by the pre-filter or killed by the iodine. The biggest parasites will be taken by the pre-filter, the weakest will be killed by the iodine, and the medium range parasites will be picked up by the active carbon. The main interest to everyone is the killing of bacteria, and here our laboratory reading tells us that we have a log. 7 to log 8 kill of most bacteria. This is better than tap water in many developed countries."

And the LifeStraw does all this for about the cost of a small bottle of "spring water" at your local airport newsstand!